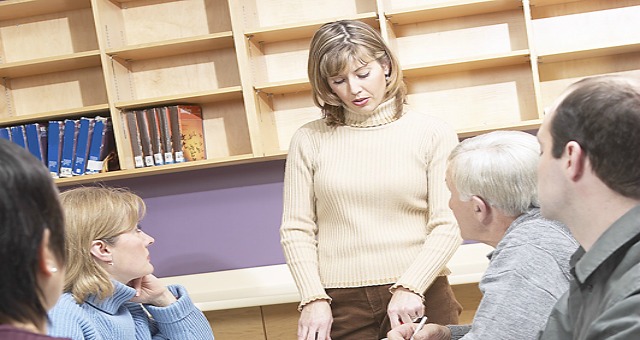 When Amanda Gingery Hostalka became chair of art and visual communication design at Stevenson University, one of her priorities was to make sure that learning outcomes for every track and major aligned with the department’s and institution’s missions. The importance of this task was heightened by the department’s upcoming move into a new building.

A major sticking point was the role of analog darkroom photography in the curriculum and how that would be accommodated in the new facilities.

“I am not an expert in photography; therefore, I was relying on the faculty to give me their expert advice. I took their input seriously, and we were in the middle of designing a very beautiful, elaborate darkroom in our new facility. We had communicated our needs to the architects, and as time passed and as I reflected about what we were about to do, there was this nagging feeling that this just wasn’t the right thing,” Hostalka says.

Despite the university’s career-focused mission, the department didn’t have approved outcomes for the photography track, which was created primarily by adjuncts who pulled together several existing courses that focused primarily on darkroom photography.

All the photography faculty were adjuncts, and one option could be to hire new adjunct photography faculty. But Hostalka never even considered that approach with these “incredibly invested and committed” instructors. “My goal was to build something that everyone could get behind and excited about, and the people who invested their time and energy and good work in building what had become a photography program would also reap the benefits of this new version,” Hostalka says.

Hostalka brought the faculty together to write learning outcomes collaboratively. “It was during those conversations that it became clear how much disparity there was among and between the faculty about what we should be doing in photography,” Hostalka says.

The faculty felt strongly that the department needed to continue to maintain the darkroom photography focus in the introductory course, despite declining enrollments and technological changes within the field. “I felt we were risking irrelevance. Initially, I thought this was going to be easy. We’d just call a meeting and talk, and the faculty would clearly see what was wrong. But there was some pretty significant resistance from those who felt very strongly opposed to the idea of limiting what we would do with our darkroom photography. They felt it would be a mistake and that we would ultimately be damaging the program and student learning,” Hostalka says.

She consulted the dean, who advised her to make incremental changes that would eventually lead to where the department should be. “I felt initially that we had to do everything all at once and didn’t really consider the small steps that we could take toward bigger change,” Hostalka says.

That first incremental step was a brief description of the track in the catalog that accurately captured its current state. Then, Hostalka did her homework. Because she was outside her area of expertise, she consulted experts and asked faculty for recommendations on whom to talk to about the direction of photography. She visited other campuses to look at their facilities and talk about enrollment trends and challenges they faced.

She brought back stories to her faculty. “I feel that that went a long way, because not only did it demonstrate that I trusted their judgment in terms of the recommendations they made to me, but I also could share with them some of what other universities were facing that was similar to our challenges,” Hostalka says.

For example, during a visit to a local college that the faculty recommended she visit, Hostalka learned enrollments were down significantly and that an elaborate 10-year-old darkroom was being used for just one course every semester and appeared to function primarily as a storage area.

Hostalka shared these stories and began to identify individual faculty members who might be open to making incremental changes. “I think in having these conversations you really need to provide faculty with concrete things to respond to. It gave us a basis for conversations that were much more helpful, and it allowed us to stay focused on the task at hand,” Hostalka says.

Talking to faculty one-on-one helped facilitate progress. “I thought mistakenly that a few loud voices represented the view of the entire group, and so one of the things I did was have one-on-one conversations with all of the stakeholders. That proved to be incredibly beneficial because I learned that some faculty didn’t feel comfortable speaking up when we were all together. So I tried to create a safe space where faculty could share their concerns about the direction we were or weren’t taking. Faculty also led me to other resources and shared with me other stories they had. Many of them were teaching at other schools, and that was valuable. They knew what other schools were doing, but they were reluctant to say so in a public setting,” Hostalka says.

Through these conversations, she identified a faculty member who was an advocate for more digital integration and asked this faculty member develop a 100-level digital photography course, which turned out to be very popular and successful. “The other majors that had required their students to take a darkroom photography course almost immediately shifted to having their students take the digital course. Initially, we could not offer enough sections to meet demand and this became a strong indicator of how much interest there was in digital photography on our campus,” Hostalka says.

This incremental step provided time for everyone to think about larger changes. “I can’t emphasize enough the importance of being patient and giving faculty time to digest the new direction and see that there’s not much to be fearful of and reassuring them and giving them more resources and supporting the things they’re doing while at the same time continuing the conversation,” Hostalka says.

Over time, it became apparent that there could be a middle ground. Other institutions offered gateway photography courses that would introduce analog and digital processes, but the faculty did not want to take the approach.

“The arguments they were making for keeping darkroom photography seemed to me to be less about the basic skills of photography and much more about the fact that you can’t call yourself a photographer unless you know how to pull a print in a darkroom. What I realized over time and what I think we all eventually were able to understand is that it really wasn’t that every student needs a darkroom but that every student who is serious about photography needs a darkroom. We realized we had another option. And that was to front-load our curriculum with digital and make a darkroom available to upper-level students in courses that would focus on more alternative processes. This darkroom would be for students who had already established an interest in photography and wanted to understand it more fully and more deeply and go back to those historical processes.

“Once we got there it was terrific because we all could now agree that there was another way. It made the faculty fairly comfortable because it was in alignment with their values. By emphasizing emerging technologies and professional practices, this approach was also in line with our institutional mission.”

After the incremental success and an understanding of the faculty members’ values, Hostalka connected proposed changes to the university’s mission and strategic plan. “I made the connection so that everyone understood that this is where we’re headed, here’s why, and here’s what could happen if we don’t make these changes, not that I was using fear as a tactic. I was much more focused on the excitement of what this program could be,” Hostalka says.

“She held a retreat. I came for the first five minutes and thanked everyone for being there and put my faith in her and her team. That was difficult for me. I didn’t know what I would get back, but I felt that we had been talking long enough that there was some pretty established guidelines. I knew that she and I had an understanding of where we could go and where we wouldn’t go,” Hostalka says.

Outcomes
From this meeting, Hostalka was able to get the faculty to develop a workable set of outcomes. The new school of design building has a state-of-the art digital photography studio, and there will soon be a small but new darkroom in another building that will house all the fine arts programs. And the department has just hired its first full-time photography faculty member since the track was established.