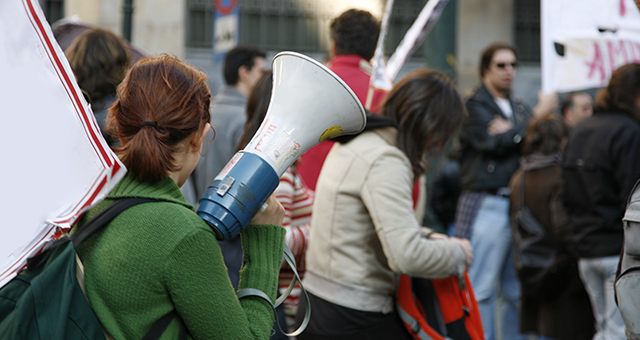 The last few years have seen a rise in both controversial campus speakers and vociferous student protests (the latter often in direct response to the former). The college campus, which has long been a bastion of the free exchange of ideas, has become the nexus of this clash of ideals, and ignited a debate over free speech, hate speech, and censorship. In our Q&A series Spotlight on Campus Speech, Academic Leader Today brings campus administrators expert perspectives to help understand the current challenges of campus speech issues. For this installment, I interviewed Tom McDaniel. McDaniel’s conference presentation “Campus Freedom of Speech: Issues for Academic Leaders” was one of the top ranked sessions of Magna’s 2017 Leadership in Higher Education conference in Baltimore. His essay “Freedom of Speech Issues: A Legal Primer for Academic Leaders” was anthologized in The Academic Leader’s Handbook.

Academic Leader Today: There has been a lot of media coverage about the culture of political correctness on campuses—there are articles about trigger warnings, safe spaces, etc. Critics of this trend claim these are symptoms of a sheltered, infantilized student body. When I did a google search of “political correctness and free speech” these two results appeared one on top of the other:

Clearly the question of how political correctness affects free speech has been dichotomized (at least by some headline writers). What is your take?

Tom McDaniel: This is certainly an issue on campuses today! In a highly polarized political climate, many critics on the conservative side (especially the extreme branch called “the Alt-Right”) castigate student protest groups that try to bar conservative speakers on campuses. This is tricky for administrators because student protests are a staple of free speech and have been supported in many First Amendment cases. The standard for such expression cases comes from the 1969 Tinker v. Des Moines case where the US Supreme Court ruled that public school officials (in this case secondary school officials) could not restrict student protest speech—even armbands—unless there was actual or reasonably predictable  “material and substantial disruption.”  So, if student protests reflect what might be called “political correctness” go too far, college administrators could, and should, intervene to protect the speaker’s free speech rights. I would like to see more tolerance for ALL points of view from campus speakers. Clearly, after Charlottesville, measures to eliminate violence by anti-free speech advocates are essential on campuses and elsewhere in the public square. Student sensitivities have led to such campus measures as “trigger warnings” for certain issues in assigned literature and “safe spaces” for students who feel under attack. These are targets for critics alleging political correctness, as we have seen. “Political correctness” strikes me as an empty term open to definition as “any liberal belief that offends someone.”  That is a personal view, I know.

Academic Leader Today: Is it legal for a public institution to make hiring/promotion decisions based on speech/speech acts made outside the scope of a candidate’s professional duty? (An example of this could be a professor being denied tenure for publishing controversial articles on their personal blog.)

McDaniel: Increasingly, employers everywhere are looking at what candidates for employment are broadcasting via social media from Facebook and Twitter to personal blogs. In higher education, too, deans and personnel directors access all the information that they can to make good hiring and promotion (including tenure) decisions for faculty and staff. Public institutions do have to respect citizenship rights to free expression, but we all know that even “off-the-record” information uncovered in such processes shape decisions, even if at a subconscious level. We  deans do not HAVE to hire someone when there are questions about moral or ethical behavior deduced from blogs or social media sites. Promotion and tenure decisions may be dicier, but courts afford institutions rather broad discretion in such decisions. Independent colleges and universities can—and should—be guided in some measure by given religious and moral values supporting the institution, especially if they exist in formal documents like catalogues and faculty handbooks. In the case of Keyshian v. Board of Regents of the State University of New York in 1967 challenging a college policy designated to discourage hiring “subversive professors,” the court ruled that the terms “subversive,” “treasonable,” and “seditious” were too vague to guide decisions. In other instances, a rejected employee might be able to make a case if some egregious decision can be proved, but not easy to do!

Academic Leader Today: Social media is now a ubiquitous part of student life. What are your recommendations for administrators looking to craft policy regarding digital speech?

McDaniel: Career Development officers and other administrators should warn students about the dangers of revealing all manner of personal data on such sites as Facebook, Twitter, and Instagram. Employers are finding such sites a treasure trove of information that they can and do use in hiring decisions. As we keep saying (sometimes to deaf ears), “nothing on the Internet is private.” Employment and graduate school admissions decisions for students can indeed be influenced—not always for the best and not even fairly—by self-revelations in cyberspace. Policies should reflect such advice and also warn students about such matters as potential suits from targeted students who feel harassed or defamed by untrue, mean-spirited, racist, or misogynist communications to others. This includes such comments about faculty and administrators, especially when class disruptions result. On-campus messages from campus computers can be regulated to a degree while private devices (like iPhones) are much more difficult to police and are usually protected speech as a legal matter.

Academic Leader Today: According to an interview that we conducted with the Anti-Defamation League, the last 18 months has seen “a dramatic increase in racist incidents” on campus. What recommendations do you have for administrators facing this disturbing trend?

McDaniel: As I mentioned in my response just above, racism may be a problem for students using social media but also for campus culture in general in an era where such ideas as diversity and inclusion are questioned by politicians and the public. The Fisher v. University of Texas “reverse discrimination” case reviewed by the US Supreme Court in 2016 was sent back to the lower federal court with directions to review it there against a “demanding burden of strict scrutiny” and proof by the university that there were no workable race-neutral alternatives to produce “the educational benefits of diversity.” Stay tuned! The advent of the Alt-Right—promoted by some media pundits and such groups as the KKK and Neo-Nazi groups, with political and legal actions designed to limit immigration—has contributed to concerns on campuses everywhere about tensions between the races. I think open forums, good listening by faculty and administrators, and as much tolerance as feasible should be promoted by policies and practices. Many institutions have developed courses in race and culture that can be useful antidotes to racism—but no panacea.

Academic Leader Today: What are some resources for administrators regarding freedom of speech issues?

McDaniel: I like the website FindLaw and the resources available from The First Amendment Center at Vanderbilt University. You can find just about anything you need to evaluate the legal aspects of given speech situations in these two wonderful sources for educators. Here is a good text as well: The First Amendment in Schools by Charles Haynes et al., a 2003 publication by The First Amendment Center. Of course, always start with a consultation with the institution’s attorney when important issues are at stake!

Dr. McDaniel is professor emeritus and former dean, provost, interim president, and senior vice president at Converse College in Spartanburg, SC.  He is the author of many articles on school law topics and the textbook School Law for South Carolina Educators.