Spotlight on Campus Speech: Q&A with Michelle N. Deutchman of the ADL (Part 2) 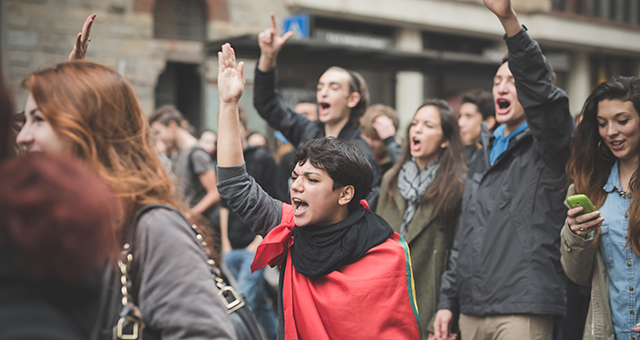 In our Q&A series Spotlight on Campus Speech, Academic Leader Today brings campus administrators expert perspectives to help understand the current challenges of campus speech issues. For this installment, I interviewed Michelle N. Deutchman, National Campus Counsel for the Anti-Defamation League, via email. This is part two of a two-part interview. Part One can be found here.

Academic Leader Today: A recent survey found “A majority of very liberal students (63%) and almost half of very conservative students (45%) agree that it is important to be part of a campus community where they are not exposed to intolerant or offensive ideas.” What are your general thoughts on these findings, and how should campus administrators use this information moving forward?

Answer: There are two issues here. One is intentional hate speech and bias-motivated incidents; the other is the fact that campuses are spaces of open inquiry and sometimes difficult conversations can feel offensive. Both situations require context and training.

Hate speech is hurtful, but even more harmful if not responded to. The most critical way to respond to students who feel they should not be exposed to intolerant ideas is to have all campus community members come together against hate and in support of an inclusive climate.

Naming the hate is essential.

With regard to controversial topics on campus, those who lead difficult conversations need training. In particular, they should understand how addressing ideas that target or disproportionately affect a marginalized identity group can cross a line from opinion to offensive or intolerant merely through insensitive language or tone.

Students also need preparation to face uncomfortable ideas and beliefs in the university setting. However, that preparation must be done with sensitivity and an understanding of how different people will experience the same conversation differently on account of their individual identity, background and life experience.

If left unattended to, controversial discourse comes across as intolerant and offensive, but it is the responsibility of campus leadership to encourage education, dialogue and training, turning these situations into learning and community building opportunities.

Academic Leader Today: The University of Wisconsin’s Board of Regents recently approved a 3-strikes policy that will punish students who repeatedly disrupt campus speakers. In the policy’s own language, it is meant to mitigate “disorderly misconduct that materially and substantially disrupts the free expression of others.” On the other hand, some have argued that disruptive protest is in itself a form of speech, and in a historical context has precipitated actual change. What are your recommendations for campus policies concerning free speech and student disruptions?

Answer: ADL believes that policies like the one recently approved by the Wisconsin Board of Regents are misguided and will ultimately chill speech on campus by creating mandatory penalties for students who repeatedly disrupt on-campus speakers.

The policy compels suspension for students found twice responsible for violating the free speech rights of others and mandates expulsion for a third violation. However, the bill does not contain definitions of “disruption” or “interference with free speech.” These vague terms increase the likelihood of misuse of the policy and selective enforcement by those who wish to silence certain perspectives or curb discussion of controversial topics.

Because the punishments are mandatory, they strip university officials of their ability to respond proportionately and appropriately to specific circumstances. This lack of discretion coupled with harsh punishments—suspension and expulsion—will discourage students from engaging in debate and voicing their opinion.

Academic Leader Today: According to the ADL’s Center on Extremism, in addition to being overwhelming young and male, adherents of the alt right are mostly new to white supremacy. Unlike the KKK, which has been a steadily declining, the alt-right seems to be proficient in recruiting college-age men. How should administrators respond to this new brand of white supremacy?

Answer:  Actually, there’s no evidence to suggest that the alt-right’s appeals to college-age men are to any degree successful. The alt-right is old school white supremacy repackaged in a nefarious attempt to appeal to a larger and more mainstream audience. Most students are not attracted to outright hate messages.  But there’s a real concern that some students may find coded messages appealing and are being drawn in by the alt-right crowd.

Students have a responsibility to educate themselves about what the alt-right truly represents, which is anti-Semitism, racism, and white supremacy. There’s plenty of research on who these groups are and what they truly represent, including on our web site at www.adl.org, where we have backgrounders on the major players and their ideology.

The administration’s response to the alt-right and to any form of supremacist or hateful ideology must be the same: vigorous, direct, and specific.

It is essential for administrators to do more than just put out a general statement about hate on campus. Rather, they should name the specific hate in order to send a strong message to the targeted group that they are safe on campus and an integral, valued part of the campus community.

Michelle Deutchman serves as Western States Counsel and National Campus Counsel for the Anti-Defamation League, a non-profit organization that has been a leader in combating bigotry, prejudice, and anti-Semitism for over a century.

As National Campus Counsel, Ms. Deutchman focuses on emerging trends and challenges pertaining to free expression at colleges and universities. She trains campus stakeholders—including administrators and law enforcement—on how to safeguard free speech at universities while simultaneously maintaining a safe and inclusive campus climate.