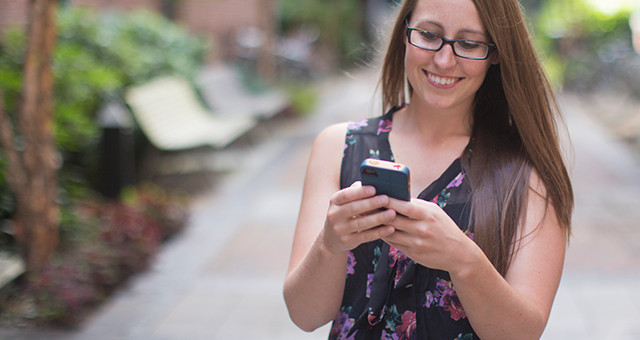 Timothy Cigelske, currently the social media director for Marquette University, discovered the power of social media in his previous life as a journalist. “I stumbled on social media as a way to research stories; it’s a useful reporting tool,” he says. Years later, both he and social media have matured, and Cigelske currently runs Marquette’s social media endeavors with the help of four interns.

Having a social media presence is no longer unique for an institution of higher education, but Marquette’s reach and consistency of message set it apart. The university has a presence on 10 different social media platforms (see: http://www.marquette.edu/social/) with the addition of Snapchat, and all of the communications support the university’s mission.

Start with a strategy

“I started a Twitter account my first day in office,” Cigelske says, noting that the university “grew horizontally” with its presence across social media platforms. Today, the multiple social media platforms allow Cigelske to talk to the many people who want to engage with the university. “We have so many constituents; we talk to people where they are,” he says. He gives the example of Facebook. Facebook is slowly becoming more popular with an older-than-student population, so the university can use its page to communicate with parents. At the same time, it does run a very successful Facebook group for incoming freshmen.

“We try things, and if [they don’t] work, we pull back,” he says. The willingness to try new things allowed Cigelske to embrace Snapchat. In an article he wrote (appearing on Medium.com) titled “Snapchat for Old People,” he explains that his initial reluctance stemmed from the fact that Snapchat is not aimed at his demographic.

“I held all the worst assumptions. It seemed to me a vapid waste of time for selfie-taking narcissists or sexting teenagers. I didn’t see an application for Marquette University, and—worse—I thought just being in the same space could get us into trouble. … There’s a good reason I didn’t get Snapchat. It wasn’t built for me,” he writes.

Cigelske turned instead to his intern Cesar, and Marquette’s Snapchat presence was born. But Cigelske didn’t just hand over the effort to his interns and assume their youth gave them all the advantage they needed when it came to mastering social media. “I rely on my interns,” he says. However, he adds, “People go the intern route and don’t have a strategy; you have to start with your mission and then work with students to get the tone right.”

Marquette has two taglines that Cigelske uses to orient his social media campaigns across platforms. They are “Be the difference” and “We are Marquette.” Those two simple sentences give a tremendous amount of guidance about the content that will appear on social media.

“Be the difference” reflects the overall mission of the university. “We show what we are doing. We’re a Jesuit school, and service is a big thing. It’s what sets us apart,” says Cigelske. The ability to concentrate on service to one’s community is a reason that students may decide to make the financial commitment to attend Marquette.

“We are Marquette” is a deceptively simple sentence that gives a lot of direction to the social media efforts. For example, it keeps the overall strategy true to showing what is truly meaningful to the Marquette community rather than encouraging efforts to pursue the elusive goal of “going viral.” “People think of social media as entertainment, but I hate the phrase ‘build the buzz,’” Cigelske says. Instead, he wants Marquette’s social media efforts to show what the university is and who the people are who make it up. “Be who you are,” he urges.

For universities that are hoping to tweak their social media presence to be more coherent and useful, Cigelske has some advice.

“You should have a consistent tone and message; try to be relevant and useful,” he says. “Universities have recognized that people are going to talk about you, so be a part of that.” Social media fits in nicely with the communications and advertising efforts of the university, so the need for coherent messaging remains important.

He also urges university officials not to shy away from social media just because they didn’t grow up using it. “If you grew up with it, it’s easier to do,” he admits. However, he tells the story of one of his first bosses, who had a tremendous amount of experience in crisis communication. “She was in her 60s, and I learned a lot from her,” he says. It isn’t one’s age that predicts social media success but one’s commitment to advancing a coherent and unique message.

Jennifer Patterson Lorenzetti, MS, is managing editor of Academic Leader and chair of the 2016 Leadership in Higher Education Conference. She owns the writing, speaking, and consulting firm Hilltop Communications.