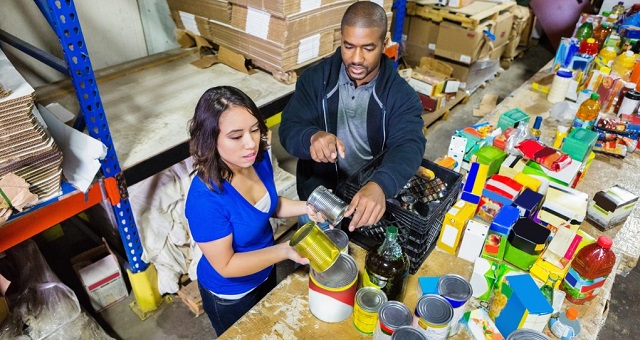 Anyone who’s ever been to college knows the old joke about the “freshman 15.” It’s not uncommon for first-year students to gain around 15 pounds during that first year on campus. But having too much to eat is not the problem many of today’s students face. Instead, they’re up against a day-in, day-out problem that never seems to go away: hunger.

With the recent surge in students needing help to feed themselves, many colleges and universities across the country have created food banks to address the issue. The LA Times reported that there are now 199 food bank organizations on campuses all over the United States (“Rise in college food banks linked to the economy and campus demographics,” Jason Song, LA Times 8/3/15.) Most of these have come into existence since the economy bottomed out in 2008. Before that, only five groups had organized food banks on campuses.

The oldest of these is the MSU Student Food Bank at Michigan State University in Lansing.

He says that the pantry came into existence in 1993 through the efforts of a group of MSU graduate students who were putting together food baskets as gifts for students staying on campus through the holidays. It was a tradition at MSU, but it became something more when the organizing students realized something: needing food was probably not only a problem during the holidays. It was no doubt a year-round struggle for many students. From this moment of realization the MSU Student Food Bank was born out of student initiative.

“We’re pretty large compared to other [campus food banks],” says Smith-Tyge, noting that the bank serves about 4,000 students and their families every year and has since 2009, immediately following the US economic recession.

The food bank is housed in the Olin Health Center on campus and is a registered student organization. “We work closely with student health services,” Smith-Tyge says. “Especially with health education.”

Why now?
But why is the need for campus-based food banks so prevalent now? “The economy is part of it,” says Smith-Tyge. “There have been long-term shifts in the way people live.”

A collapsing economy has meant a shrinking pool of resources for many students. As a result, things have changed. Undergraduates may not have the help from home previous students had. Their parents may be unemployed, under-employed, or in debt. The overall cost of living has risen while wages have not, so much so that past scenarios in which students worked during breaks and saved money to pay for school and living expenses are simply not viable anymore.

“Part-time work doesn’t cover it today,” says Smith-Tyge. “It’s almost impossible to save up enough for tuition during breaks by working.”

Because of this, students often face hard choices. Should she spend her dwindling supply of money on books or food? Should he work more hours at a job or take that extra class and graduate on time?

“The long-term success of students is at stake,” says Smith-Tyge.

Hunger isn’t the only problem food banks observe. It’s not uncommon, says Smith-Tyge, to find students who have no stable place to live while they’re at school. In fact, it’s so common there’s a slang term for it. Students call it doing the “couch circuit”—sleeping on friends’ couches a few days at a time and then moving on to someone else’s couch.

He notes that nontraditional students have become the norm at many colleges and universities, and at some make up a majority of the student body. Typically, nontraditional students are older, live off campus, work, and have children and other family members to care for. For these people, the safety net is thin and the fall is much farther.

Graduate students often fall into this category. MSU enrolls 12,000 graduate and professional students. Graduate students tend to be international students who often attend college under a grant, fellowship, or assistantship. Since they are not American citizens, they can’t take part in government relief programs. And they can’t work outside of their university positions, so they are stuck with whatever amount their grant or fellowship supplies.

Finding support
The first step in helping students who need food and shelter is to recognize that the problem exists.

“Some institutions may be reluctant to recognize that the problem exists,” says Smith-Tyge.

He notes that they may be fearful of the conversation about the cost of college and the struggle it is for many students to come up with that money. And sometimes basic institutional inertia works against the realization that hunger is a very real campus problem.

Smith-Tyge says it helps that the media have begun to recognize the problem. Coverage in news outlets such as the LA Times makes students, faculty, and administrators aware that there is a problem and that it needs to be addressed.

“Other institutions are beginning to see this as part of an array of services needed on campus,” says Smith-Tyge.

It’s important for a campus-based food pantry to have administrative support. At MSU, both the university’s president and provost provide firm backup for the campus food bank.

“They’ve allowed us to be successful and to grow,” says Smith-Tyge.

Outreach to students
While most communities have some kind of food bank, logistically it can be difficult for students to get to one based off campus.

“Students can feel a stigma using a food pantry, too,” Smith-Tyge says. “That’s a big step individuals have to take.”

He is grateful the food bank at MSU is a recognized student organization and is housed in the student health services building. No one outside the building knows that a student is visiting the food bank.

“A campus pantry can minimize any stigma and shame [associated with a food pantry] and is easier to access,” Smith-Tyge says.

The MSU food bank staff workers strive to provide an open environment that respects student privacy. They do this in several ways:
• The pantry is advertised with flyers and posters, and through social media.
• It supplies information for other helpful services on campus and in the surrounding community, such as food stamps and housing aid. Workers can help students find out if they’re qualified or help connect homeless students with a social worker.
• Clients can come in on a one-to-one basis.
• The bank uses a number system instead of names. Students take a number when they enter and that number is called when it’s their turn. Smith-Tyge says, “It’s like waiting in line at the deli.”
• Bank staff workers maintain a matter-of-fact attitude about needing food services.
• Staff workers also make distribution time a time to make friends.

Expanding service
The MSU Student Food Bank supplies not just food, but ideas on how to use the types of food it supplies to make tasty, nutritious meals. A graduate student is in the process of putting together a toolkit on how to use canned foods. She is creating it with the help of local chefs.

“We’re a solid part of the campus community,” says Smith-Tyge.